Unfolding Types Of Rice In India Rice is one of the most commonly consumed foods in the world, and for good reason: It’s versatile, substantial, easy to prepare, and delicious, making it a perfect staple in every kitchen. Whether it’s incorporated into a main dish, served as a side, or transformed into a snack or dessert, rice can do it all while providing comfort and satiety.

Rice grains come in three sizes: short-, medium-, and long-grain. Each type has distinct characteristics and works best in a specific dish. Short-grain rice, like arborio rice, bomba rice, and sushi rice, is similar in length and width and takes on a sticky texture when cooked. Medium-grain rice is about twice as long as it is wide and becomes moist and tender when cooked. Long-grain rice, like jasmine rice and basmati rice, is anywhere from three to four times as long as it is wide and takes on a drier, fluffy texture when cooked.

When perusing the aisle, it can be overwhelming to see the rice varieties available today. From standard varieties like white or brown rice to specialised types such as arborio, red cargo rice, it’s enough to make any consumers’ head spin. Here, we break down 10 different types of rice, explore their distinctions, and provide the best ways to enjoy them.

This aromatic long-grain rice is quintessential to Indian, Middle Eastern, and Central Asian cuisine. Basmati rice is native to India, where more than 70% of the world’s basmati supply is produced. The fragrant rice’s global demand is high, so a number of countries, such as the United States, grow their own basmati varieties and hybrids. 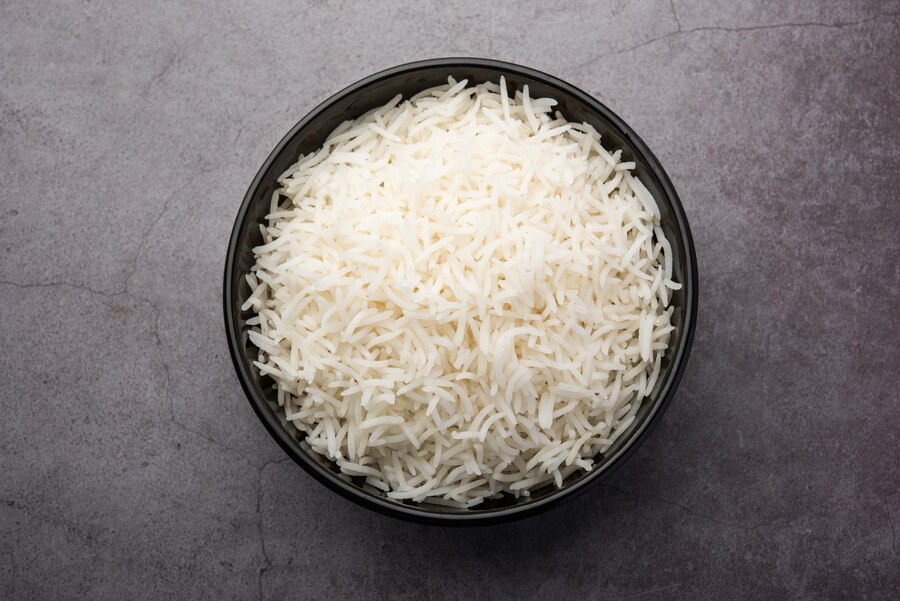 Basmati rice is the king of all types of rice in India. It is a long-grain rice. It is also a highly popular variety of rice for making Biryanis, Pulaos, and several other royal rice delicacies. The word basmati itself means aromatic. And it’s true to its name. You would probably not find any other type of rice, which is as fragrant and flavorful as India’s basmati rice.

This is a hybrid variety of Basmati rice in India and is the most cultivated Basmati rice with 70% of the total cultivation of Basmati in the country. It is predominantly grown in the states of Punjab, Haryana, Himachal Pradesh, and Uttarakhand. The variety offers exceptional characteristics of Basmati rice, which includes long grains, pleasant aroma, long shelf life, and more. You can use this rice to prepare many royal Mughlai dishes, as it goes well with the rich flavours of these preparations.

Jasmine rice is a long-grain rice that’s known for its mild, sweet flavour. Primarily grown in Southeast Asia, jasmine rice is a staple in Thai and Cambodian cuisine. Jasmine rice, especially white jasmine rice, takes on a slightly sticky texture when cooked and is usually served steamed and as a companion to other dishes. 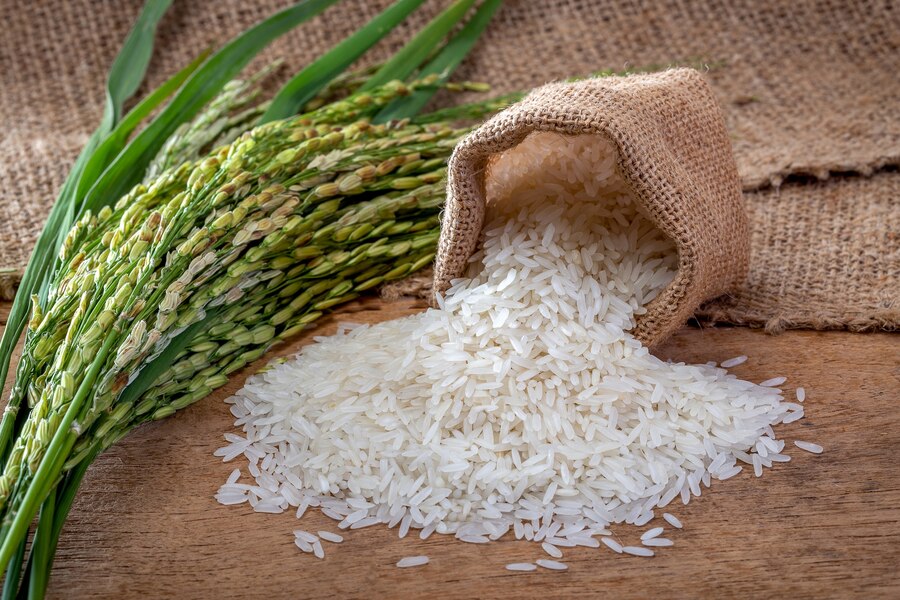 It’s one of the rare qualities of rice, which imparts such an amazing fragrance to various dishes. And you would probably not find a similar aroma in any other type of rice. As for its other characteristics, the Mogra rice comes under the long-grain rice category. And it contains a high amount of starch as compared to Basmati rice.

There is one more variety of Mogra rice in India. And it is called Mini Mogra rice. The grains of this variety are shorter in size as compared to standard Mogra rice, but the aroma is somewhat similar to it. Overall, Mogra rice is a great substitute for traditional Basmati rice. It offers a soothing aroma and is comparatively cheaper than long grain Basmati rice. Since it’s an aromatic variety of rice, you can use it to make Indian pulaos and other spicy rice delicacies. You can also make Biryanis with it, but you may not get the quintessential Biryani texture and flavours with this rice.

Also known as whole-grain rice, brown rice is a lot like white rice, but hasn’t had as much of the grain removed—the only part removed from brown rice is the outer hull, which is inedible. White rice, on the other hand, has the outer hull, germ, and bran removed, and is polished once the milling process is complete. Brown rice thus has a denser texture, nuttier flavour, and higher nutritional value, including much more fibre, magnesium, B vitamins, and iron. It’s super versatile and makes a healthier substitute wherever white rice is used, but can also pair with most dishes. 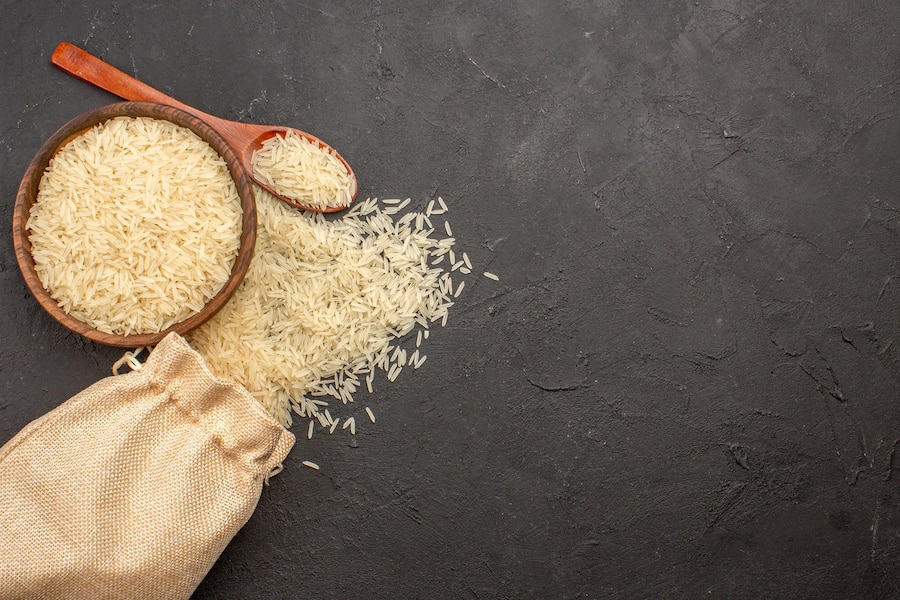 Parboiled rice is rice that has been partially boiled in its inedible outer husk. This process improves the texture of the rice, cuts down on cooking time, and saves some of the original vitamins and minerals found in the rice. It is technically a cooking method for rice rather than a variety, so it can come in long, medium, and short grain rice varieties. Parboiled rice has a mildly nutty flavour. It is used for stuffing, bowls, casseroles, stir fries, and rice pilaf. 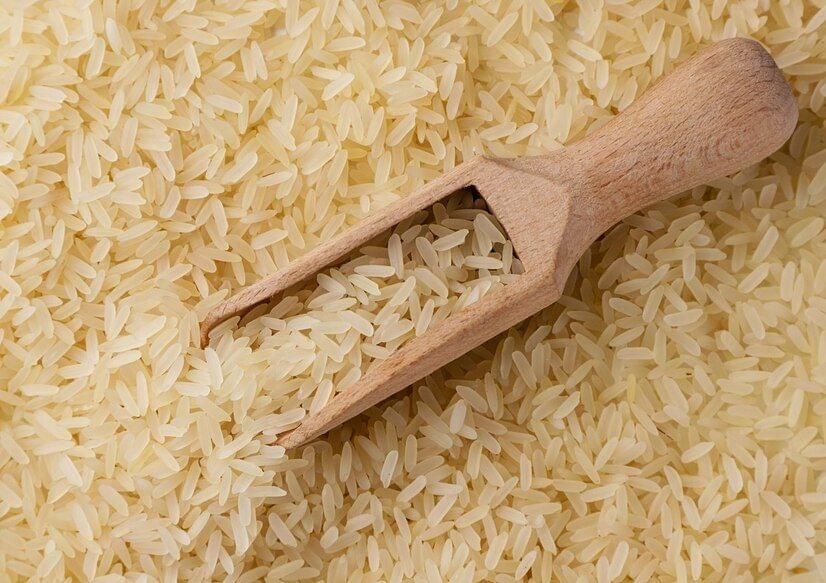 Surti Kolam is a popular white rice in India. And as the name says, it comes from the state of Gujarat. It is a medium-grain rice, which is useful in making staple rice dishes. And it tastes good as compared to other standard white types of rice. Also, it’s not very aromatic rice, and you can use it for your everyday cooking at home.

Sona Masuri Rice is quite popular in Andhra Pradesh, Telangana, and Karnataka. It is a medium-grain rice. As far as the aroma is concerned, it does smell good. And you can use it to prepare many South Indian preparations including Curd Rice, Lemon Rice, etc. You can also make Idli, Dosa, Uttapam, Akki Roti, and Thengai Paal Payasam with this variety of rice.

Ah, the Gobindobhog! Gobindobhog rice has a special place in each Bengali’s heart. Its unique taste, texture, and aroma make it one of the most popular rice varieties in the state West Bengal. Also, the grains are not as long as Basmati rice. And these characteristics allow the rice to be used in almost all rice dishes prepared in Bengali households. Overall, it’s an all-cuisine rice variety!

Bamboo Rice is not a typical rice variety in India. It is procured from the dying Bamboo shoots, and it’s quite different from the standard white rice and red rice. When the Bamboo shoot nears to the end of its life span, it blooms and produces lots of seeds resembling the traditional rice. These seeds are nothing but Bamboo rice!

The tribal communities of Kerala harvest this rice as their staple food. Talking about the characteristics, it does appear like any other paddy rice variety. However, it turns moist and loses its texture after cooking. As for the taste, it tastes similar to wheat grains. It’s also sticky rice, which means you can only use it to make plain rice. You shouldn’t be using it to make Biryanis or Pulaos. Traditionally, the local folks cook the Bamboo rice on the auspicious occasion of Pongal. Regarding its availability, it’s not a very popular rice variety in the state as well as the country. Hence, its use is pretty much limited to the nearby regions of Kerala.

A Japonica medium grain rice known for its short, glossy, white and sticky texture in Asian Cultures. The Calrose Rice has a sleek sheen after cooking. Once cooked, it becomes slightly soft and sticky, making it ideal for dishes where the grains need to hold up, like sushi, soups, or salads. Calrose rice also has a very mild flavour, meaning it can absorb any bold ingredients, such as herbs and spices, with ease.

Indrayani rice is a well-known variety in Maharashtra. It is cultivated in the Maval region of Pune. It is a medium-grain rice and is a hybrid variety of Ambemohar rice. And you can prepare Plain Rice, Masale Bhat, Vangi Bhat, etc. with the help of this rice variety.

HMT Kolam rice is another widely popular rice variety in India. This type of rice comes under the category of short-grain rice. The rice is known for its distinct aroma and taste. And like all other Kolam types of rice, you can use it for daily use. You can also make Pej (Kanji), Masale Bhat, Vangi Bhat, Fried Rice, Khichadi, Jeera Rice, and Pulaos with this rice.

Sushi rice is a short-grain white Japanese rice that’s cooked and combined with rice vinegar, sugar, and salt and then incorporated into sushi. It’s known for its stickiness, but doesn’t possess the same qualities as glutinous rice. 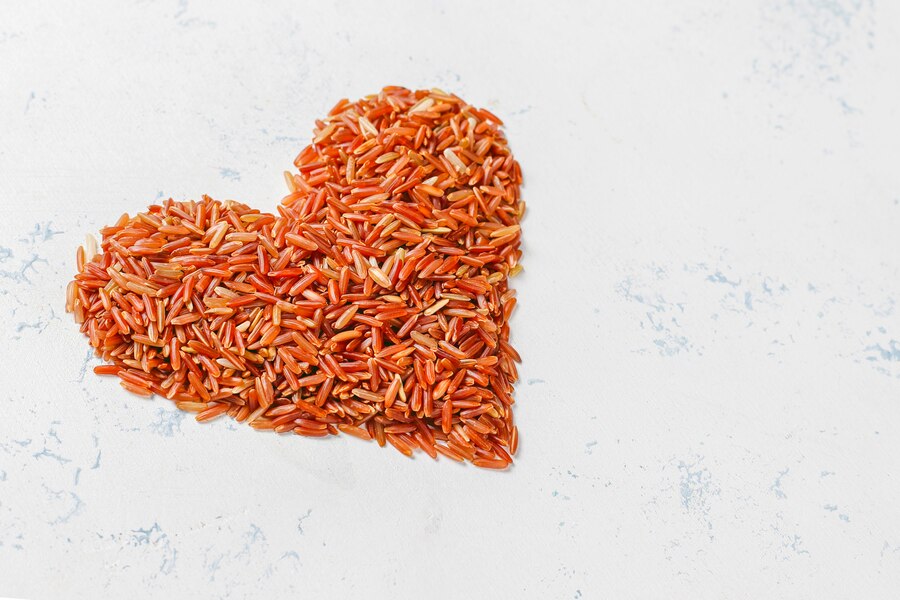 Ambemohar is a popular rice variety in Maharashtra and nearby regions. It’s one of the most fragrant types of rice in the state. The word Ambemohar refers to Mango blooms in Marathi. And these rice grains impart a similar pleasant aroma to various dishes. It is a short-grain rice, but it tastes a lot better than standard white rice varieties.

You can use this rice to make different Maharashtrian dishes, including Varan Bhat. You can also make Tawa Pulao, Vegetable Pulao, and Masale Bhat using this type of rice. It enhances the flavour and aroma of these preparations. So, if you are in Maharashtra, don’t forget to try this rice. You will remember its taste and aroma for a very long time.

Wada Kolam comes from the Wada region of Palghar district in Maharashtra. It’s an indigenous variety of rice and has an earthy flavour to it. It’s also a small-grain rice variety and is often used to prepare Pej (Kanji), Plain Rice, and Khichdi. Although the rice is known for its taste, this variety is on the verge of extinction.